We awoke to a rainy morning and quickly packed our things to prepare for the busy day ahead. At around 10am, we took a taxi to The Siam Hostel and got our things settled before heading out to find gear. I had lucked out and found a great deal on gloves at SuperSports in the Central Festival Mall, but I still needed shin pads and Sam needed both shin pads and gloves. Despite being an inexpensive country to travel in, the markups on gear made it close to US price, if not higher. I would recommend bringing gear from the US if possible, but if not, the low price of the classes makes overpaying for gear really not seem so bad.

We also went to Tesco Lotus to stock up on some food for the week. Classes would be going on throughout most of the day, and they began at 7am, before most places opened for breakfast. The street was lined with storefronts selling all kinds of gear. We ended up purchasing our shin pads for 1200 baht, my 12oz gloves for 550 baht, and Sam’s 16oz gloves for 1600 baht.

We went to bed early the night before training and set our alarms for 6am. I went through several scenarios in my head as I fell asleep but little did I know, nothing could really prepare me for what I had signed up for the next day.

I was tired in the morning when the alarm woke us, but my excitement quickly took over. I ate a banana as we walked to class and cleared my head. I payed special attention to stay as present as possible throughout the class to absorb as much as possible. I arrived at the outdoor training area and found two or three students running in a circle. The instructor motioned for us to join the circle and so the class began.

We ran for about 20 minutes, adding different variants to the laps closer to the end. By the time we were finished, I was already drenched in sweat from the humid weather. The instructor stood on a wood platform in front of the class and began to describe the punches we would be practicing, giving each of them a number he would say during combinations. He fittingly called himself Mr. Miyagi, a very special soul. We practiced punches and kicks for about a half hour, as other coaches walked around the room correcting student’s form. We stopped to get water before we were taught fighting strategies. We paired up with other students around our size and practiced pulling and pushing them into submissive positions. It wasn’t long before we were training one on one with coaches, they called out numbers as we performed the corresponding punches and kicks. Then we did bag work, doing push ups and sit ups in between each set. 15 minutes before the end of class we stood up and said our name and where we were from. I assumed the exhaustion was over until Mr. Miyagi gave us 100 more push ups and 300 more sit ups to do. As if that weren’t enough on it’s own, coaches walked around the room with pads, hitting students in the stomach as they did their sit ups to break down stomach facia. I thought I was going to be sick.

We walked back to our hotel room exhausted, unsure of how we were going to complete the second class in just a few hours. I just got my butt kicked, I thought as I could barely stand in the cool shower. My muscles were already starting to ache but somehow, I mustered the strength to complete another grueling two hour class in the heat. It was the beginning of a very long week… 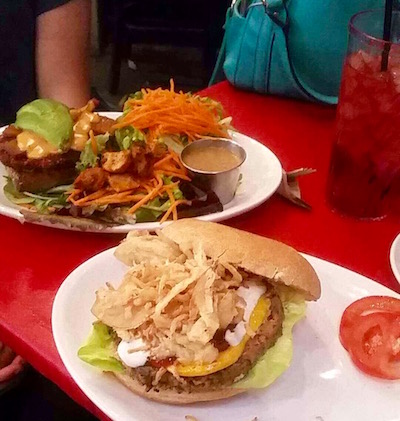 I just finished my leftovers and they were amazing.

Native Foods in Palm Springs is the best for an incredible, fast, vegan meal at a fair price. They have a surprisingly large menu, and I’m glad I checked it out online ahead of time as there is a LOT to choose from. The staff is also very friendly. Monte was working the register when we ordered. He had a great personality and was very knowledgable. I ended up ordering the chicken bacon avocado sandwich…and I have found a lifelong friend in Native Foods. It takes more planning to prepare vegan meals, so sometimes I’m just left snacking, especially when I’m out and about and the only things around are fast food. Even if just for the novelty, I encourage all my local friends to give it a try. I can’t wait to go back!

What are some vegetarian favorites in your area?